Following last years successful Munro bagging trip last September, with my good friend John Parkin, we are planning to repeat in October 2014 what we hope will be at least an annual event.

All of last years walks were expertly planned by John using Ralph Storers "The Ultimate Guide to the Munros, Vol 1" resulting in a grand total of 12 Munros bagged over 6 walks within a 9 day walking window, using this same book to plot this years routes outlined in this post below.

We will be meeting up for a similar period, but for me ever looking to squeeze in an extra few days, I will be coming up 1 week earlier to catch up on a couple of Munros John has completed , including Ben Lomond, as well as maybe a couple of isolated Munros around Crianlarich and/or Tyndrum.

It really is too far to drive from Suffolk for a trip of less than 2 weeks.

First week alone
Following on from my Cuillin Ridge trip last May and failing to complete 1 walk due to being both physically and mentally tired I am planning a less ambitious schedule for this first week allowing a rest day every other day. This means a maximum of three walks for which I will plan in detail including Ben Lomond. The aim of this first week will be to prepare me for the following 10 days with John as opposed to exhausting me. This is especially important as at time of writing (end August) I am recovering from sciatica and will be undergoing intensive rehab during mid september in preparation for this trip and using the first week to recover my hill fitness.

It looks like I may also be delayed by a couple of days and John may come up earlier meaning at best I will only have time for 2 walks. The plan is therefore to go up Ben Lomond on the first walk while I am still fresh to catch up on one of the Munros John has already done. Then make my way up to Tyndrum and after a suitable rest period do a less demanding walk to increase my Corbett count by going up Beinn Bhreac-liath between Tyndrum and Bridge of Orchy.

If it transpires that John arrives before I get a chance to do Beinn Bhreac-liath I think our time will be better spent by starting the Munro walks early allowing maybe a slot later in the trip knocking of a couple of the more isolated Munros. Either by wild camping in the vans near Loch an Daimh and picking off Meall Buidhe and Stuc an Lochain or walking in to the West of Loch Lyon and going for Beinn a' Chreachain and Beinn Mhanach with an over-night bivvy out. 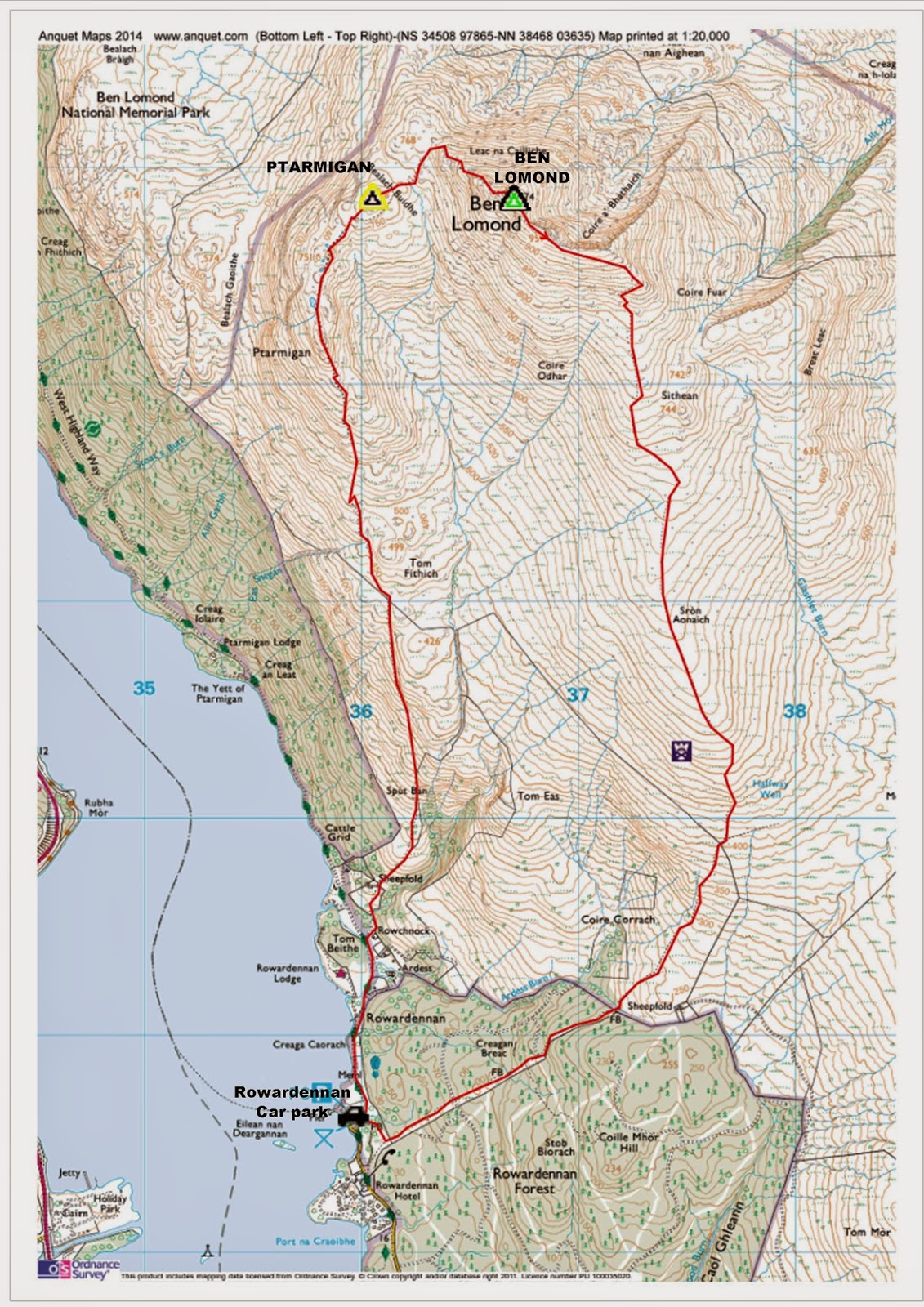 Ben Lomond is the most southerly Munro and therefore like thousands of other baggers is my closest Munro. After Ben Nevis, mainly because of its proximity to Glasgow, it is also the second most climbed Munro. and therefore has a well established tourist route that leads to the summit in under 4 miles of relatively straight forward walking making a total up and down walk of 8 miles.
There is also an alternative route via its associated Corbet Top - Ptarmigan. It is slightly more difficult due to some minor scrambling needed on the westerly approach to Ben Lomond but is slightly less distance. This is the approach I will take as it allows me to bag an extra peak keeps the scrambling in an uphill direction and creates the all important circular route by returning down the Tourist Route. 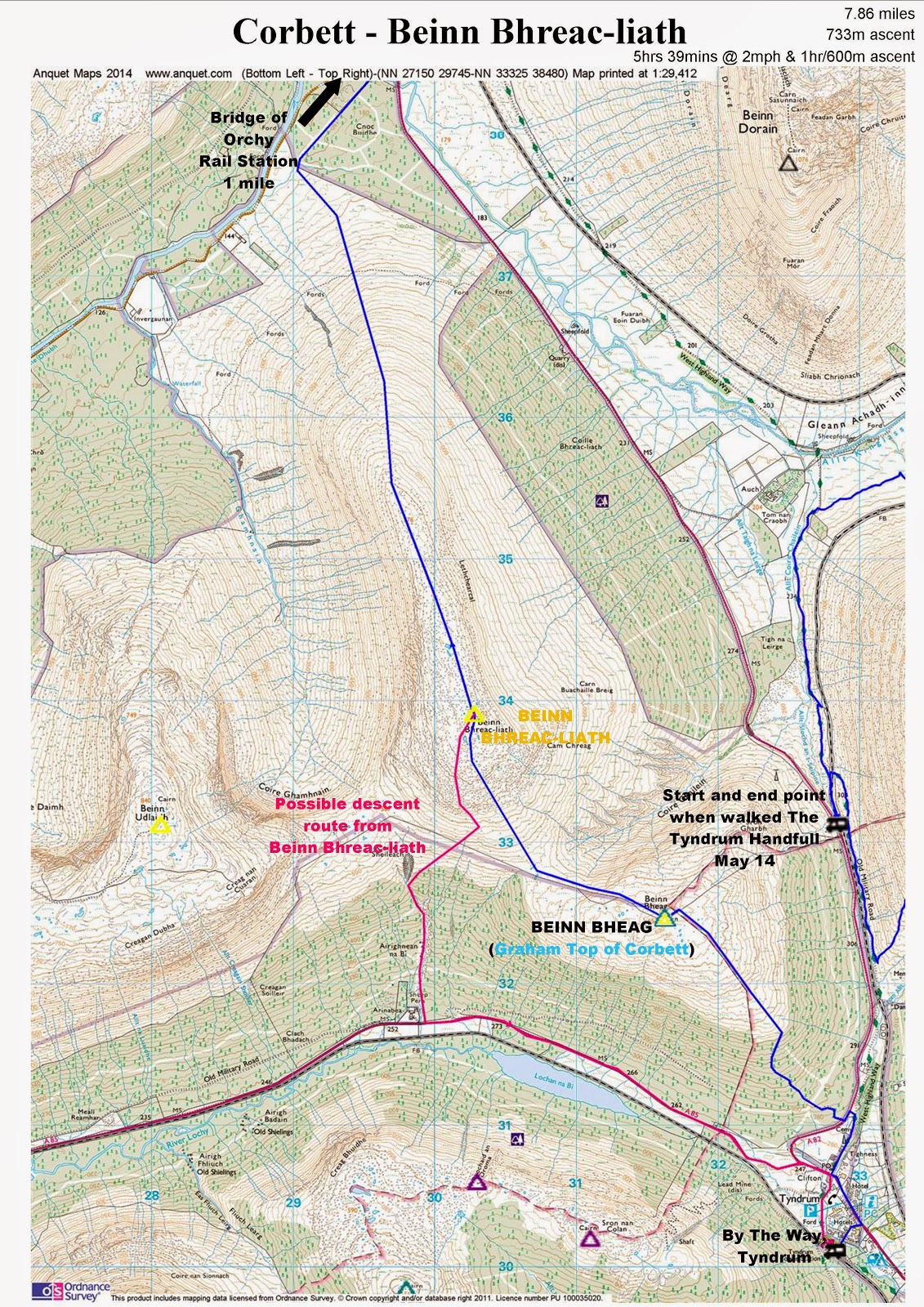 This will only be the second walk of my trip so do not want a walk that is going to over exert me. Hence keeping the distance down and total ascent at a modest level. If I am joined by John before getting a chance to do this walk I will leave it for a later lone visit and suggest we go for the Ben More route with Stob Binnein. Even with the inclusion of the Munro Top of Stob Coire an Lochain it is less distance but of course significantly more ascent. Evenso with trip preparation in gym am sure will not be too much. I will make sure I have a rest day before John arrives and will have the option of a rest day next day.

The preferred route for this walk is to catch the train from Tyndrum Upper to Bridge of Orchy and walk back. If however for some reason I do not manage to get up in time to catch the West Highland train from Glasgow to Fort William at 10:25. I will start the walk from Tyndrum following the route in reverse visiting Beinn Bhreac-liath via  Beinn Bheag. From Beinn Bhreac-liath I will assess the descent down the it's southern ridge through the pine forest returning to Tyndrum via the A85 to Oban.

Next 12 days with John Parkin 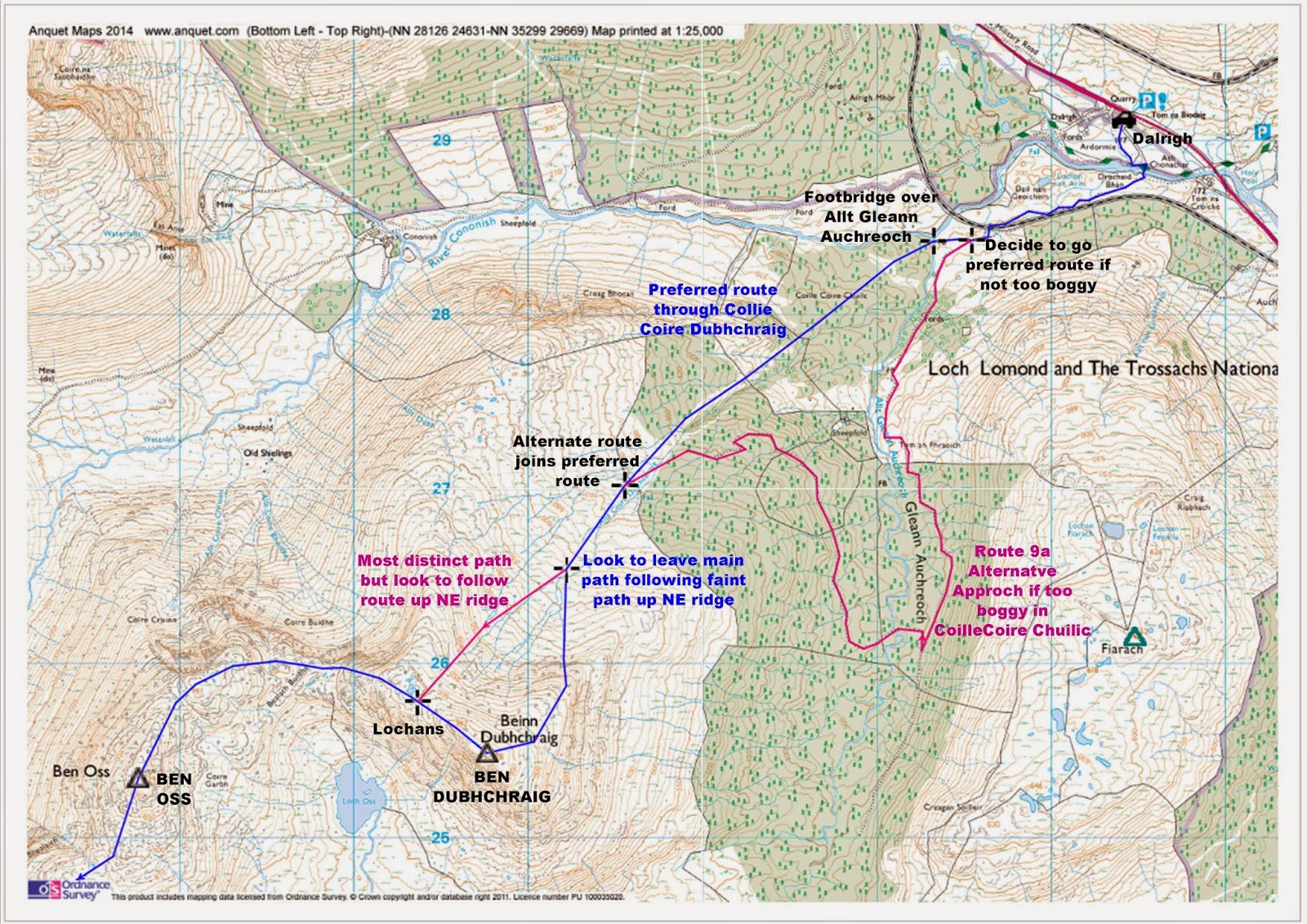 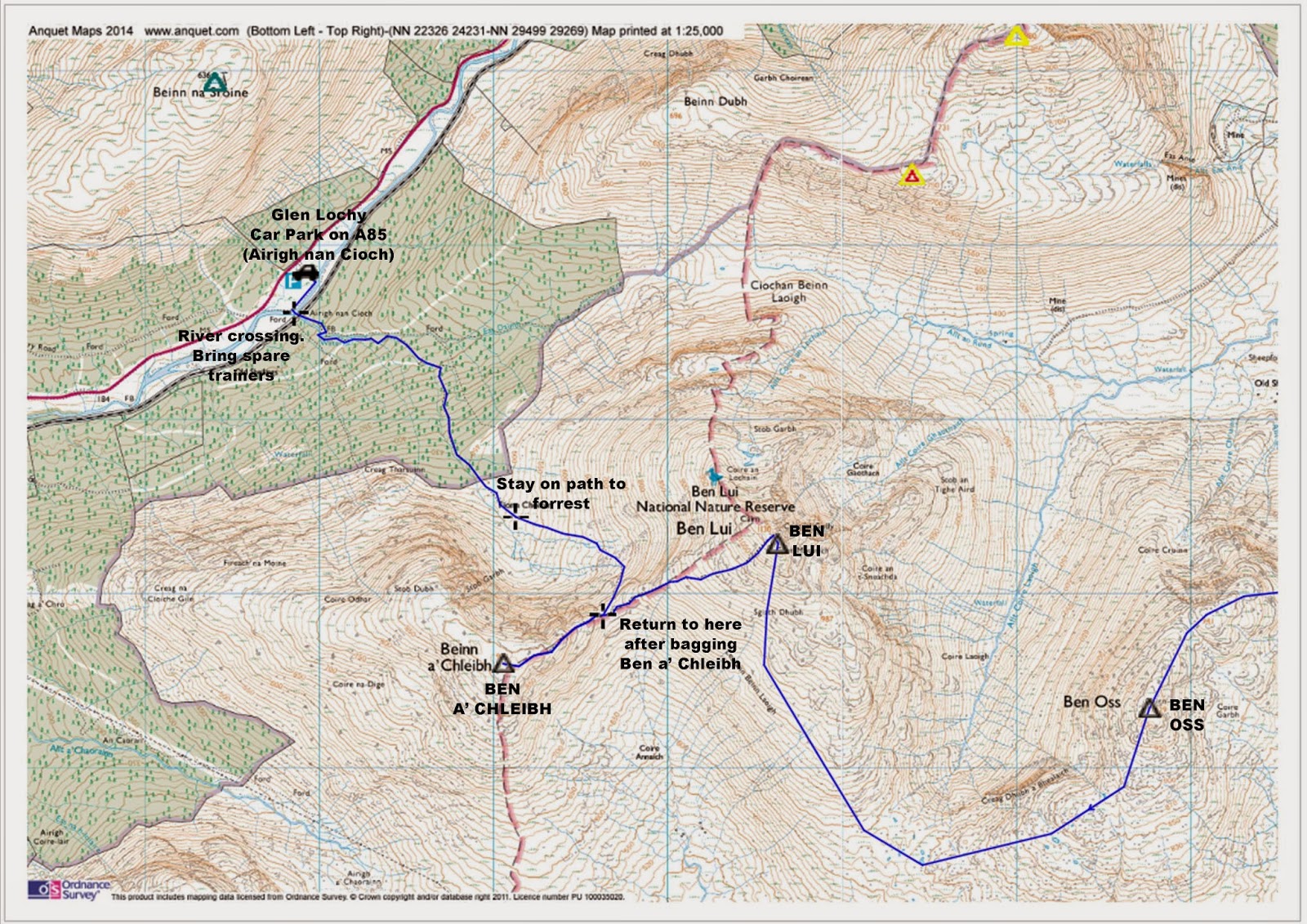 During my last visit to Tyndrum I could see the four Munros including Ben Lui and Ben Oss from what I called the Tyndrum Handful and thought they could all be maybe done in one go. After some route planning using amongst others, Ralph Storers Ultimate Guide to the Munros, and recognising my own limitations I know a circular route in excess of 18 miles from Dalrigh would be too much. Both in terms of time and daylight hours available but more importantly my own physical capabilities

With two vehicles and a linear walk from Dalrigh to the car park on the A85 near Airigh nan Cioch 12 miles and 1700m of ascent seems more within physical capabilities and with an early start should be achievable in daylight hours especially when compared to the Tyndrum Handful which took 12 hours and was 15½ miles with over 2000m of ascent.
In the event it does take longer there is the option to take an exit routes back to Dalrigh leaving Ben Lui and Ben a' Chleibh for another day. With the most difficult part of the route being through the boggy path through the pine trees of Coille Coire Chillic I would expect this to be triggered if we are not at Ben Oss by by mid way through available daylight hours. (Max 11 hours in October) 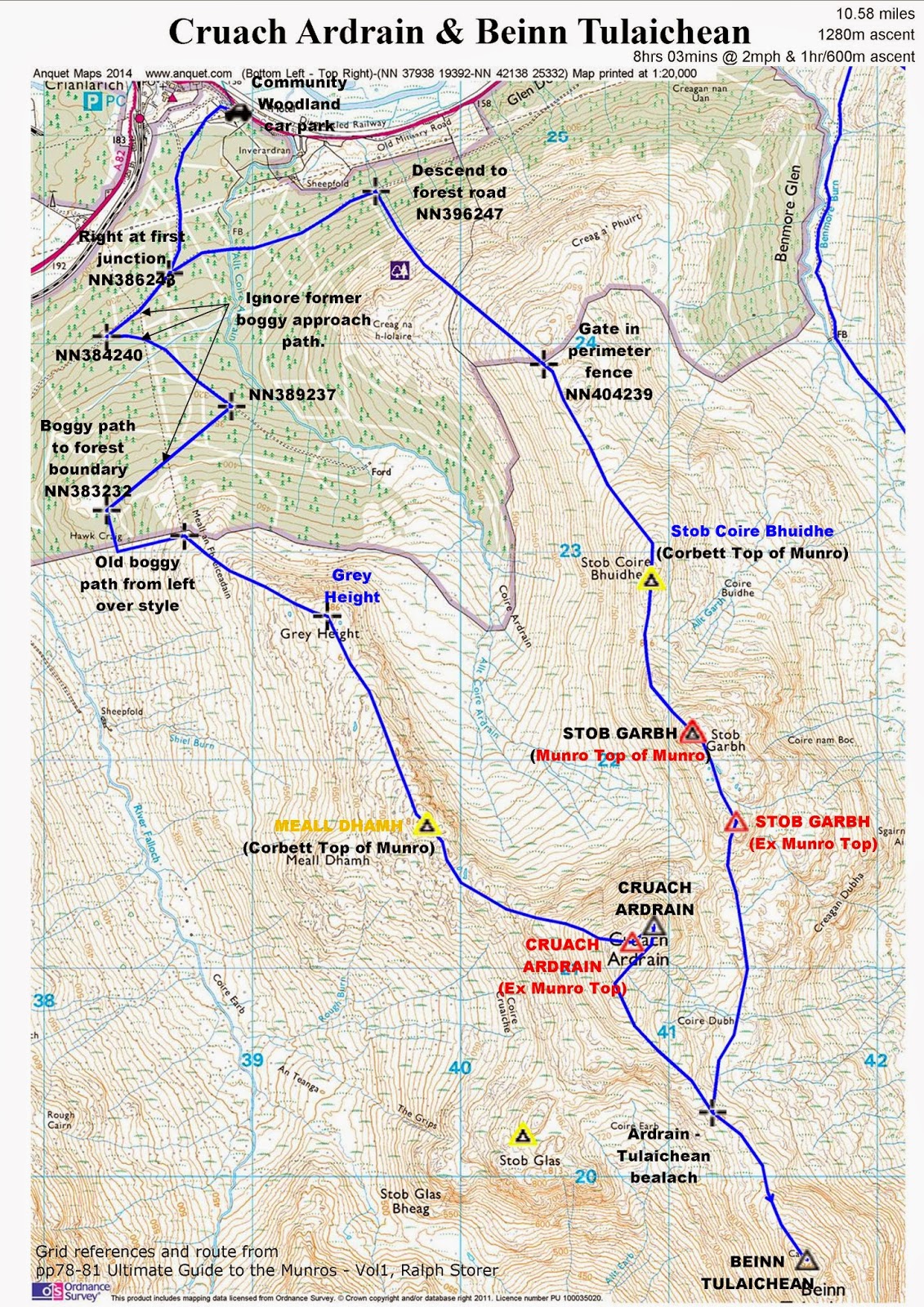 Both the Ben More and the Cruach Ardrain routes could be walked from Killin but are closer to Tyndrum so have been included as walks based at Tyndrum. As Cruach Ardrain is the closer of the two hopefully we will get at least this walk in from Tyndrum should bad weather restrict the walking days available whilst based in Tyndrum.
Starting at the community car park on the A85 out of Crianlarich and navigating forest tracks through woods to Meall an Fhreiceadain below Grey Height (neither of which are peaks) the 1000m plus Cruach Ardrain is the highlight of the days walk with the added bonus of tagging the relatively isolated Munro of Beinn Tulaichean on as well. Failing that it will be an up and down walk with an extra day to pick up Beinn Tulaichean from Inverlochlarig after a long drive round to Balquidder. I suppose on the plus side though we could pull in some history visiting Rob Roy’s grave in Balquidder and sight of his house in Inverlochlarig. Maybe will do that anyway, sounds like a days activity without tagging on a walk. If we do manage both Munros it will turn out to be a productive walk in terms of extra peaks because rather than returning after the climb back up to Cruach Ardrain we can cut right at the Bealach between Cruach Ardrain and Beinn Tulaichean via Stob Garbh and Stob Coire Bhuidhe making a total of 7 peaks including 2 ex- Munro Tops. 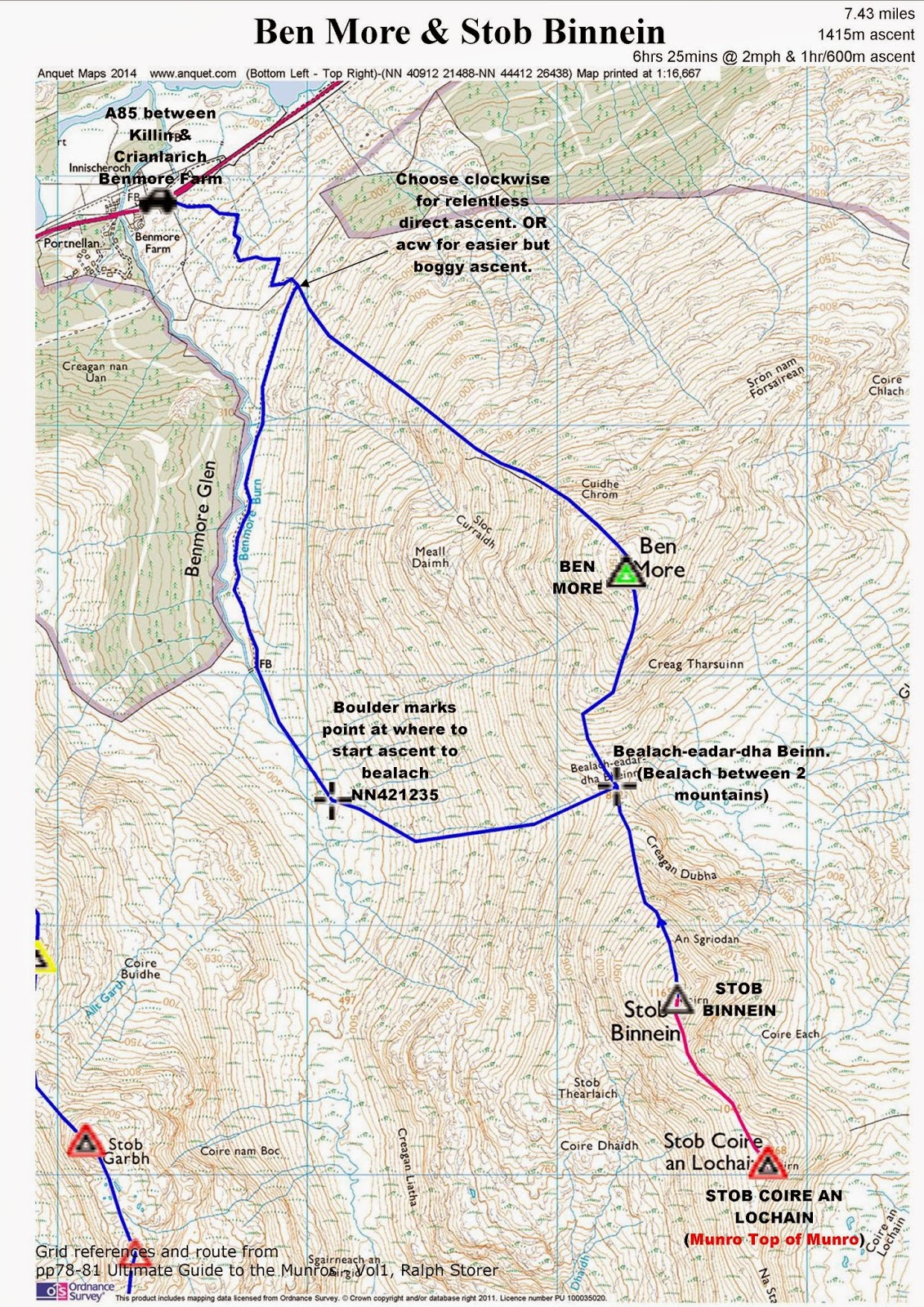 From Benmore Farm we have a choice of clockwise up the steep NW ridge or a shallower approach along Ben More Glen. My preference is to attack the steep ground first bagging Ben More first followed by Stob Binnein we then have the option to do the "there and back walk and go for the Munro Top of Stob Coire an Lochain if we still have the energy before returning to Bealach-eardar-dha Beinn and back to Benmore Farm along Benmore Glen.
At a total distance of only 7½ miles including Stob Coire an Lochain I reckon  the one thing that would stop us is if the weather took a turn for the worse. 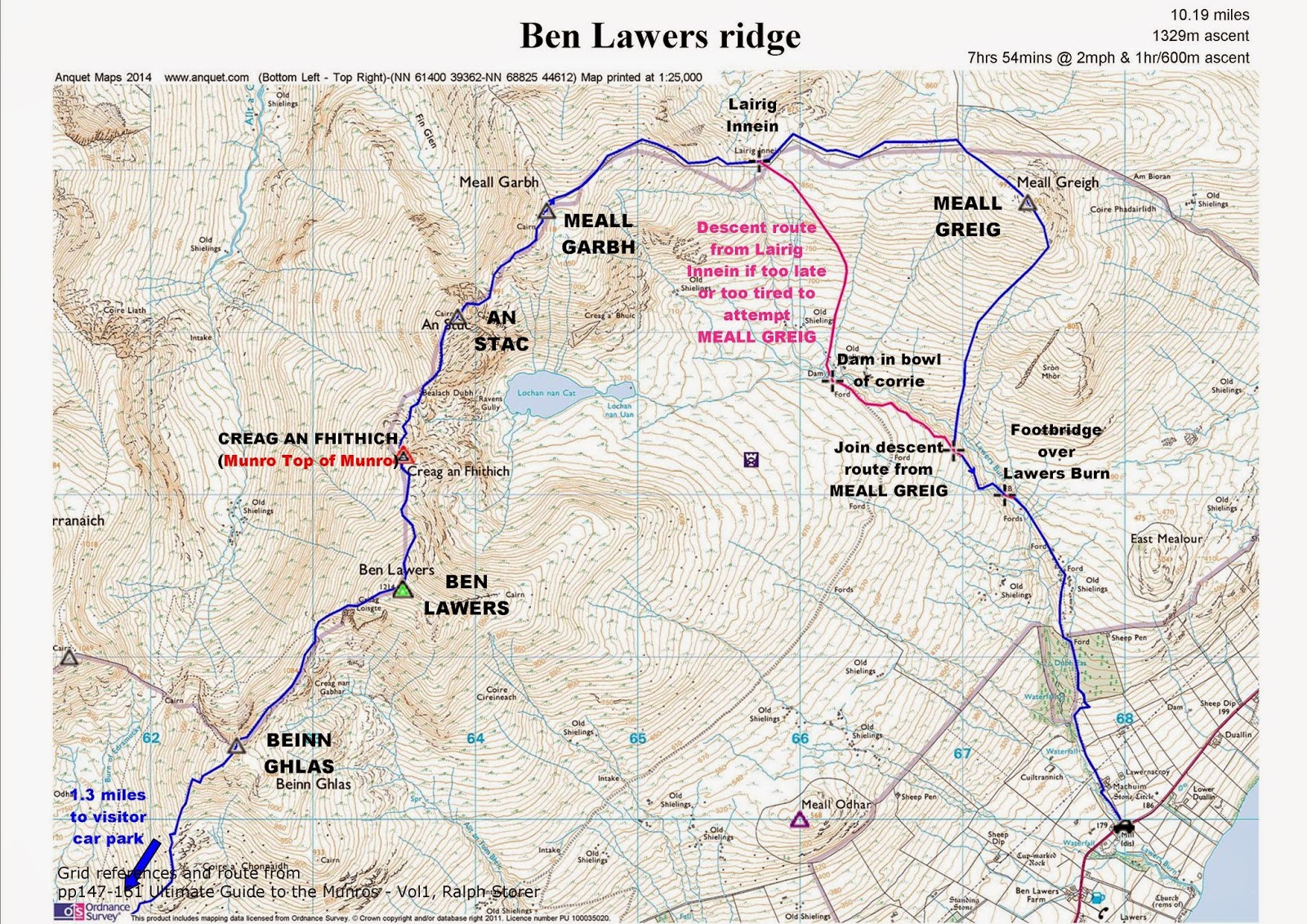 With the benefit of two vehicles a point to point walk from the Ben Lawers visitor centre car park to Machuim on the A827 between Killin and Aberfeldy gives us the chance to bag 5 Munros in one expedition. Given fair weather a total distance of just over 10km and 1300m of ascent keeps the attempt well within physical capabilities. There is opportunities to head back to the start point if the weather does take a turn for the worst but I would say the point of no return would be somewhere around An Stac where it would be better to press on and take the exit route at Lairig Innein leaving Meall Greig for another day if energy or daylight is short.
As an alternative we could consider starting at Machium. This direction may be more preferable if we decide it is better to scramble up the gully on An Stac NE ridge rather than shimmy down it. But once down the hardest terrain Between Ben Lawers and An Stac is behind us rather than once up ahead. 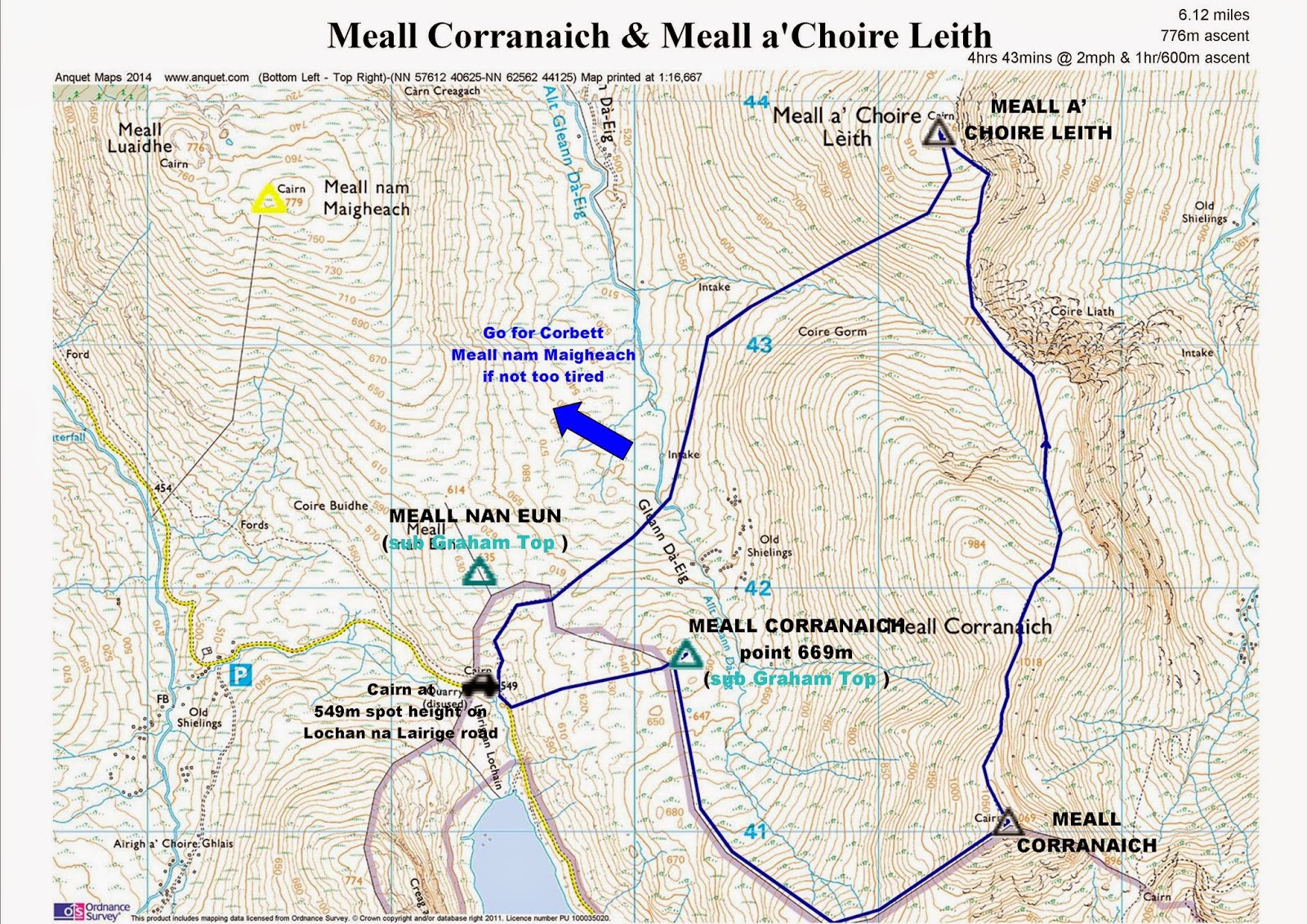 From the map this looks fairly straight forwards walking anti-clockwise. There is mention of boggy terrain in the guide book but once the wall has been found near Meall Corranaich point 669m sub Graham Top navigation following the wall all the way to the main summit of Meall Corranaich should not be a problem.
Not withstanding the 300m descent to bealach between Meall Corranaich and Meall a'Choire Leith the ridge walk should also be straight forward as long as we stay right/north and not be tempted down the NW ridge in to Coire Gorm.
It seems the main problem will be the boggy ground at the beginning and more particularly at the end of the walk. Energy permitting it may be preferable to stay north of Allt Gleann Da-Eig tributary and pull in the Corbett Meall nam Maigheach thereby avoiding the worst boggy ground between the two sub Graham Tops of Meall nan Eun and Meall Corranaich point 669m. But to be honest it may just be an excuse to bag an extra peak as I suspect it is only a case of delaying the boggy ground which probably can not be avoided. Perhaps it is a case of taking a pair of old trainers for the last few hundred yards and avoiding giving the boots a good old soaking over their tops.
Posted by Steve at 11:41